On Thursday I met with the Grey Nurse team from Sea Shepherd Australia who found 2 live Sting Rays in the shark net at Lennox Head and 3 dead rays.

Here's an image of two of these beautiful creatures hopelessly entangled in that net: 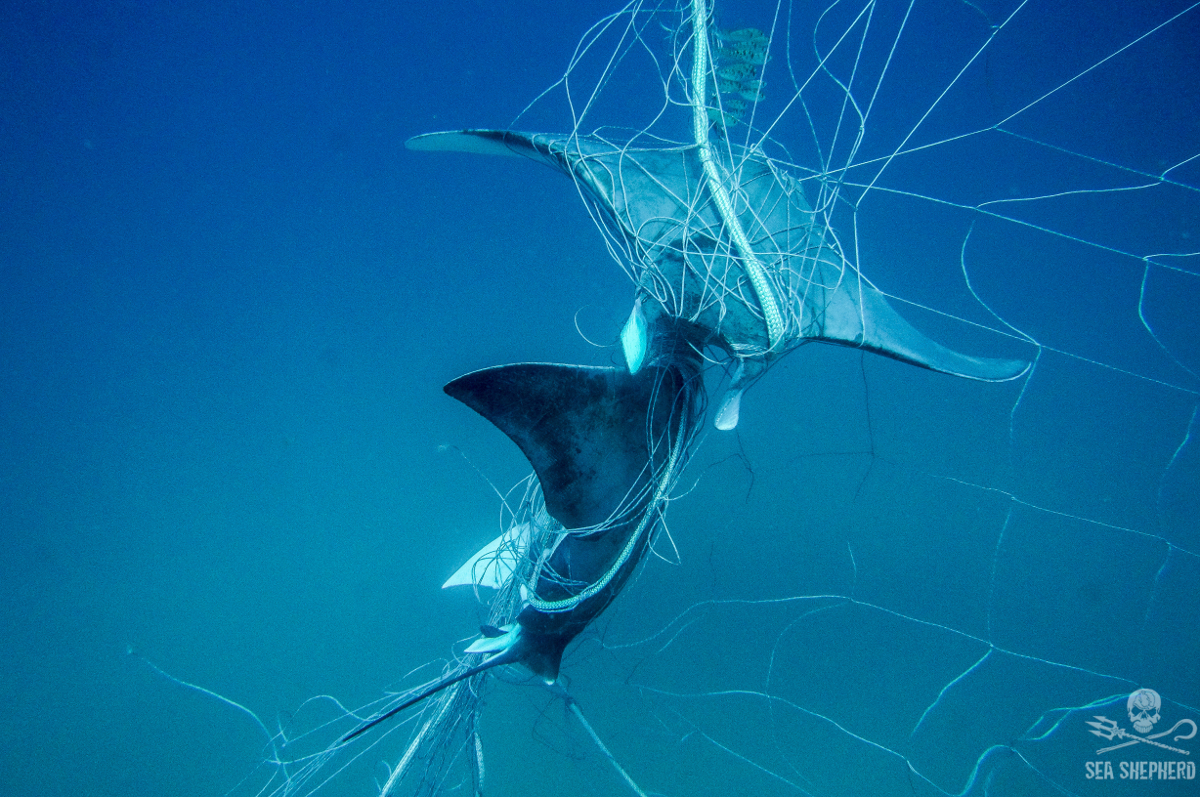 What’s even more disturbing than the pointless death of our precious marine life is that in the last trial of mesh nets the public was told they were being checked twice a day - in practice this rarely happened due to weather conditions, but that was the initial commitment. In this second trial despite the DPI saying they are working harder to reduce by-catch in the nets, they have only committed to checking the nets every 12 - 48 hours.

There are very few species that will survive 48 hours in a net and dolphins and sea turtles certainly won't.

I discovered it was very difficult to be able to contact a contractor to come and free the trapped rays at Lennox. Yet any citizen who tries to help a trapped animal faces a $22,000 fine for interfering with the nets.

The reason the DPI contractor came to free the rays was because they were checking the net due to a GPS alarm that triggers when a net moves out of position, not because anyone had been able to contact them about the rays.

What I expect to see is a lot more by-catch from this second "trial" of shark nets off Ballina's coast. The first trial showed:

This week the the Australian Senate report into Shark Mitigation and Deterrent Measures recommended that the New South Wales and Queensland Governments immediately phase out shark net programs and increase funding support for the development and implementation of a wide range of non-lethal shark mitigation and deterrent measures. [Download the report PDF here]

The NSW government is once again ignoring its own evidence and the recommendations of a Senate report by continuing to set shark nets.

The NSW government has the SMART drumlines in place off our Northern coast beaches, now they need to get rid of the shark nets.

The nets give a false sense of security to swimmers and surfers and provide no warning to anyone in the water of shark activity. The nets kill harmless marine life in far greater numbers than the shark species they are intended for.

To report marine life caught in the nets phone the NSW DPI Fisheries on 1300 550 474 and select the Shark Net option when prompted.

This number will be answered during business hours and diverted to an on call number on weekends and out of hours. There is no guarantee however that a contractor will be available to go to free anything smaller than a whale in the nets outside of their scheduled net check (which could be up to 48 hours later).

Take action - sign my petition to stop the shark nets. Thanks to your concern about this issue we have reached the one thousand signature mark!

Have a safe and happy holiday season and thank you for your support this year.

This week I supported a group of concerned Lennox residents who did not want to see a 200 year old fig tree cut down by Ballina Shire Council.
After debate, Council decided to go ahead with the decision to cut the tree down. However Council have told me this will not happen until late January or early February. There is one last chance to save this tree - do you know anyone who is an expert in fig tree conservation?
If we can get new technical information from a specialist about this particular tree and its situation then Council can reconsider its decision.
If you know of someone who can help, please get in touch with me at [email protected]

You can read transcripts of all Tamara's speeches, questions and debates here

For regular updates and to discuss the issues affecting you, the Northern Rivers and NSW, like Tamara's Facebook page

Tamara and her team are available to help with concerns you may have about any local or state issue. Call us on 6686 7522 or contact us.