The Greens have called for a ban on single-use, plastic bags to protect NSW’s oceans from marine pollution. An estimated 50 million plastic bags end up in the environment each year in Australia, mostly in waterways and the ocean where they injure and kill dolphins, turtles and other marine life.

Greens candidate for Ballina, Tamara Smith joined the Positive Change for Marine Life group in Byron Bay to announce the Green’s proposed legislation to ban disposable plastic bags by the end of 2015.

“Plastic grocery bags damage our environment and marine ecosystems, and New South Wales must stop lagging other states and adopt legislation to ban them.

“The Greens are working on legislation for NSW to stop this growing environmental disaster. Previous Labor governments have toyed with plastic bag bans or levies but never delivered, and the Nationals have done nothing to prevent plastic bag pollution.

“South Australia, Tasmania, the Northern Territory and the ACT have successfully banned lightweight plastic bags, so there is no excuse for NSW to allow them. 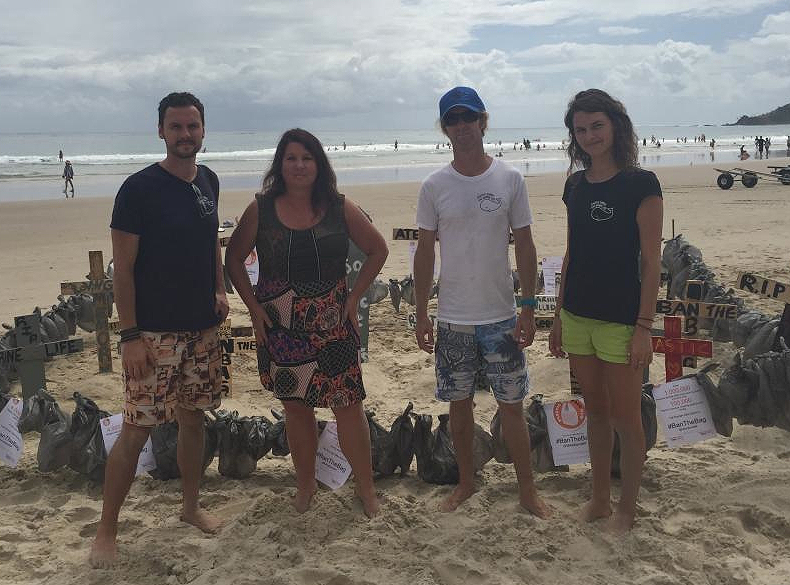 “I swim the Bay in Byron everyday and see the impact of plastic bag pollution in the marine ecosystem. It’s shocking and we can do much better. There are alternatives to plastic bags, so it is time to get on with a ban. This will be the first order of business for Green MPs in the Lower House in the next parliament.

“When South Australia stopped the use of plastic shopping bags in 2009, it showed that people very quickly changed their behaviours and brought their own bags to the supermarket.

“If retailers like Bunnings can operate effectively without plastic bags, there is no reason similar practices can’t be adopted by supermarkets and smaller retailers. There are plenty of alternatives available for businesses and consumers,” said Tamara Smith.

The Greens’ ban will be similar to laws in other states, which ban lightweight shopping bags from being given out or sold by retailers to customers. The ban will focus on plastic bags of less than 35 microns, which includes single-use, lightweight bags such as grocery bags with handles.