Greens education spokesperson Tamara Smith has today condemned Labor’s views announced in the Sydney Morning Herald that over-funded private schools should have their funding maintained at the expense of disadvantaged public schools.

“Labor is no longer interested in supporting everyday Australians whose children go to Public Schools, instead they are committed to continuing to give limited public money to the wealthiest private schools.” Said Ms Smith

“The main concept of Gonski school funding is to lift the performance of disadvantaged students,” said Tamara Smith.

“Disadvantaged students, whether it be economic, social or educational disadvantage, overwhelmingly go to Public Schools.”

“Pouring more money into private schools is not the answer – adequately funding the education of disadvantaged students is.”

The Greens are calling on the Government to deliver the full $4.5 billion “Gonski” school funding model in NSW, directly from the NSW education budget.

“Every dollar needed to meet the Coalition’s shortfall in Federal funding for Gonski in NSW schools can be met by reallocating less than half of the $1.12 billion directed to private schools in the state’s education budget,” said Ms Smith.

The NSW state budget for 2015/16 forecast a $1.12 billion annual spend on private schools. The Federal government’s full Gonski contribution could be met with less than half of what the state government spends on private schools in NSW. Full Gonski funding can be met entirely from the NSW education budget if funding is redirected from the State’s elite private schools with the highest Index of Community Socio-Educational Advantage (ICSEA) rating. 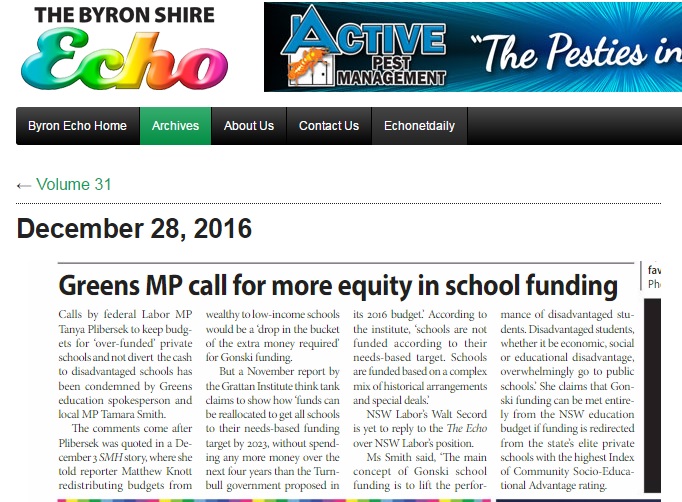