After a marathon sitting that lasted until 4am on Thursday morning, the law to ban greyhound racing in New South Wales was finally passed, making it illegal across the state from next July.

This is an historic moment that comes after many years of campaigning by community groups, animal welfare activists and ordinary people who have been appalled by the reports and inquiries showing terrible breaches of animal welfare.

Thanks to everyone who supported this campaign, and if you are interested in finding out how to adopt a greyhound, you can find more information here. We're told they make great pets.

Please read my speech in parliament during the debate on the passing of the Bill. (More below)

Tamara Smith's contribution to the debate on the Greyhound Racing Prohibition Bill 2016:

"This legislation reflects the complete loss by the greyhound racing industry of its social and moral licence to continue to operate in New South Wales, and it is something that The Greens and, in particular, the late Dr John Kaye, have fought for over many years. The Greens commend the Premier for this decision—and all those who are supporting the legislation—and for having the courage to take action. The reason we have fought for this, and the reason that we have been single-minded about this issue, is the appalling and inhumane facts surrounding the industry that are well known, that were horrendously highlighted by the special commission of inquiry and that have become evident in this debate. 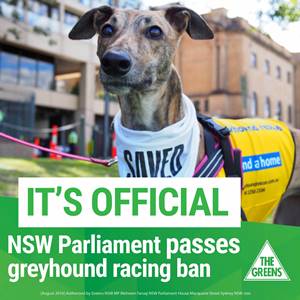 The Greens get that Labor sees itself as fighting an ideological battle on behalf of working-class people. The Greens accept that it is a difficult legacy to let go of for racing families who have loved their dogs and who have been let down by the industry. But the facts that emerged from the special commission of inquiry shifted this debate and the ultimate decision to ban the industry from 2017 well outside of any ideology. It shifted this debate beyond ideas to a stark unveiling of a reality: a picture of torture, animal cruelty and injury, and dog deaths on a scale that is unprecedented and intolerable in a twenty-first century society such as ours. The facts that have emerged take this debate far from ideology to a line in the sand. Crossing that line—standing by and allowing this barbarism and animal cruelty to continue for the sake of gambling—would say something about the kind of people we are and the kind of community we are.

This industry has grown beyond the dog races of my grandfather's ilk and, in its contemporary form, is doomed to kill and injure thousands of dogs each year. It also denies healthy dogs from being rehomed because of the damage to their temperament from the barbaric practice of live baiting. The normal life expectancy of a greyhound is between 12 and 15 years.

Over the past 12 years in New South Wales 97,783 dogs were whelped. Currently there are about 6,809 registered greyhounds—a greyhound is eligible to be registered when it is 12 months old. Absent death through misadventure or illness, the average life expectancy of a greyhound indicates that another 90,974 greyhounds should still be alive. Some pups whelped in the last 18 months maybe within litters, are being reared and broken in, or are in pre-race training and not registered. However, assuming that none of those juvenile animals—approximately 10,253—have been destroyed, where are the remaining 80,721 greyhounds? What has happened to them?

Some of them will have found homes outside the greyhound racing industry or been exported interstate or to other countries, some will have been retained by their owners as pets or breeders, or some will have died of natural or accidental causes. But the evidence before the commission indicated that at least 50,000 of those whelped—perhaps up to 70,000—were deliberately killed simply because they never were or are no longer capable of being competitive racing greyhounds. The evidence suggested that somewhere between 48,891 and 68,448 of the 97,783 greyhounds bred in New South Wales in the past 12 years were killed because they were considered too slow to pay their way or were unsuitable for racing.

The Greens are compelled by the assertion of the inquiry that Greyhound Racing NSW is concerned about the number of healthy dogs being destroyed each year but that addressing the mass slaughters are beyond the industry's capability. Each year the industry currently needs—and without a dramatic reduction in the number of race meetings it holds will probably continue to need—6,000 or more greyhounds to be whelped in order to maintain its racing schedules. However, the industry cannot and will not be able to find homes for between 50 and 70 per cent of these dogs. The Australian Working Dog Alliance reported:

If greyhounds are unable to deliver financial rewards, their demise is probable. Indeed, death at an early age is the likely fate of most of the dogs that never make it to the race track.

I highlight that this comes from the research of the industry's peak body. In recent years Greyhound Racing NSW, like the controlling bodies of greyhound racing in other States and Territories, has attempted to reduce wastage rates principally by the rehoming of greyhounds; those efforts have not been successful. Since 2007 it has rehomed only 593 greyhounds through its Greyhounds As Pets program at a cost of $200,000 per year. The commission estimates, given the tax facilities of potentially rehoming organisations, that this is extremely fraught and there has been no evidence of a viable plan.

In evidence before the select committee Dr Karen Cunnington of the Greyhound Rehoming Centre said in 2013 that if only 50 per cent of the dogs being bred in New South Wales each year were trained for rehoming, the cost of that training would be up to $60 million. This indicates that rehoming the number of dogs being bred is not a viable proposition. I commend the RSPCA and Greyhound Rescue for the amazing work they do in rehoming greyhounds. I urge everyone who can to adopt or foster a greyhound through Greyhound Rescue or to donate, sponsor or volunteer.

We know from the inquiry that until recently the Greyhound Racing NSW policy as to dog deaths on tracks was such that information was not to be included in stewards' reports. This calculated stance by the regulator was intended to prevent the public, including persons who may be critical of the greyhound racing industry such as animal welfare organisations, from obtaining information about the number and frequency of deaths of greyhounds on race tracks in New South Wales. As to misreporting of injuries, in April 2013 the commission found that Greyhound Racing NSW management had adopted a policy of sanitising and misreporting the description of injuries recorded in stewards' reports. The commission had no doubt that the reason management adopted this policy was to avoid criticism of the industry in New South Wales, particularly by animal welfare groups. This was in 2013.

In February last year we witnessed live baiting. The community saw graphic and disturbing footage of live animals—including rabbits, possums and piglets—being mauled and killed by greyhounds at the command of their trainers. It is estimated that 10 per cent to 20 per cent of greyhound trainers in New South Wales engage in live baiting. The issue is typically viewed as raising animal cruelty and welfare issues in respect of the animal being used as bait, such as the terrified rabbit. However, what is less appreciated is the adverse effect that live baiting can have on the future wellbeing of a greyhound. For a significant number of greyhounds the exposure to live baiting can permanently alter them as a result of introducing increased predatory aggression. This adds significantly to the difficulties in being able to successfully re-home the greyhound after the end of its short 365‑day racing career, and that is only if it has not sustained an injury.

The existence of the practice of live baiting severely taints the greyhound racing industry in New South Wales because of the barbaric cruelty involved in baiting animals and the future prospects for dogs bred in this way. The history of legislation over the past 200 years shows an increasing recognition by the civilised world that without strong legislative intervention and vigilant supervision by regulatory bodies, greyhound coursing and racing inevitably fosters the cruel and barbaric treatment of animals, including the vast majority of greyhounds. My grandfather loved the dogs, but the industry today is not the industry that he loved. Live baiting is only one of the barbarous practices that has been historically associated with greyhound coursing and racing. The deaths of and injuries to tens of thousands of healthy dogs is the other. I commend the bill to the House."